Sale on canvas prints! Use code ABCXYZ at checkout for a special discount!

Just what I saw 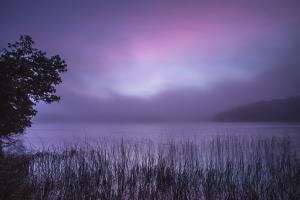 Despite all the pre visualization, all the scouting, all the planing and all the visits, being a landscape photographer means lots of "not quite right moments" . Then there are these moments. The forecast called for dense AM fog along the lake. So I knew any chance of pre dawn images on the east side of the island was unlikely. So I headed over to a small inland lake on the west side hoping there would be enough fog for for drama but not to much. Even with planning a slim chance. When the alarm went off at 3:45 AM this was the image I had in mind. One hour later this appeared just long enough to capture this image before the fog closed in. Something to remember the next time I find myself in the midst of one of those "not quite right" moments" 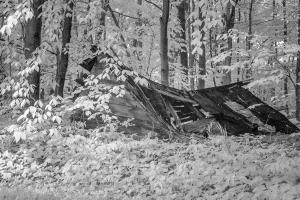 Little did I realize that shooting infrared out of boredom the other morning would re awaken an old passion of mine. Before I started to photograph portraits for $ one of the things I did for enjoyment was shoot infrared film. Now shooting infrared on film and doing it as electronic capture with a converted camera are two different worlds. With film the process was to compose and focus and then put a dark red filter in front of the lens. Since this filter caused the view finder to go black several things occurred. First you had to use a tripod to hold your composition. Second, since you knew the viewfinder was going to go black you of course focused before you put the dark red filter on but infrared focus on a color wave length our eyes can not see so you had to read the red focus line on the lens barrel to re focus. Exposure? forget about it. If you were real good with a light meter you could establish a base exposure and then bracket in both over and under exposure several times to get one usable image, you hoped. Remember, back in film days every click of the shutter cost about $2.00 so you learned to take good notes real quick Now, if you paid good $ to have digital camera converted to shoot infrared only, like I did, a lot but not all of the challenges got easier to deal with. Since there is no per click cost with digital capture we are free to experiment more. Adobe has also come out with some new software that allows you to come very close to the infrared film look.

When all else fails 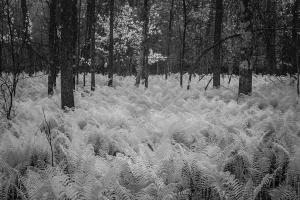 So what to do when you have spent over an hour waiting for what you were sure was going to be the perfect conditions for a a sunrise image? After fighting blood sucking skeeters and boredom for well over and hour I finally had to admit there was simply to many clouds and to much fog for me to get the rays of the sun being split by the trees and creating shafts of light onto the forest floor of fiddle head ferns that i had in my mind. So now what? Well I grabbed the infrared camera body to see what I could do. Now this was not ideal conditions for infrared either because it prefers heat and sunlight to work the best but tree trunks and wide foliage are good subjects for this so I thought lets give it a try. With some, OK a lot, of software tweaking this is what I was able to come up with. Not perfect, but good use of time and I still got to be in the woods at dawn,a win win in my opinion. 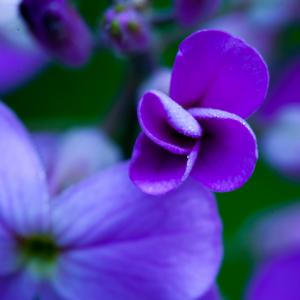 One of the reasons I enjoy early AM macro photography is the opportunity to capture dew on the petals. As in this image, taken on an otherwise dry morning, the dew was only visible when I got the lens this close. Another reason to say no when I am tempted to hit snooze when the alarm goes off.

I Matey, charts and compass I say

Landscape Photography and Sailing are similar in a couple of ways. Plot a course and check it with charts and a compass. For the June full moon,"Strawberry moon" my first plan was to photograph it rising over a farm along Lake Michigan. A couple of days of scouting provided nothing that was quite what I was looking for. So on the evening I was to photograph it I left early for one last attempt to find that special spot. Not only did I not find it by the time I stumbled across a small lakeside park I had never seen before I was almost out of time. As I scrambled over rocks onto a gravel beach I spotted the old pilings with shore birds perched on them. A good foreground for the rising moon I thought but I need to set up in just the right spot as I may not have time to move and re set. So out came the full moon chart showing rise time and compass point, alright so that is stored in my smart phone, the point is I had the tools to get the shot on the first try.

Its the light dummy 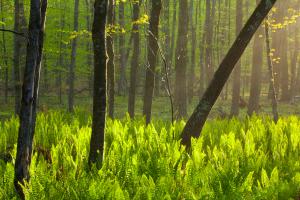 The first time I was listening to a speaker, on photography, and I heard the term " you are not photographing the subject but rather you are photographing the light falling on your subject" I thought I had just wasted good money that was hard to come by. How can you photograph light? How does it fall? It took me a very long time to understand what that meant. Sometimes, as in this image, the light is easy to see, kinda slaps you in the face, other times it is much harder to find. Sometimes it is not there at all. Like this morning a good reason to go back to bed. When you do find it you can transform ordinary subjects, like ferns and tree trunks, into a dramatic statement. Of course, as always, there is no substitute for good planning and being prepared. This was not the first time I had stood in this spot. 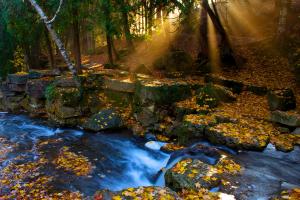 Like most photographers I firmly believe in the old adage of being prepared. One of the ways I do this is by scouting my locations in advance and then returning to create when the conditions are what I want. This image of a set of falls on the Devils River was scouted in advance for several shots. After I had the shots I had planed on I turned for a slippery walk back to my camera bag and was slapped in the face by this. Oh My! need to find a way to make this work quick with the equipment I have with me. So plan, plan, plan but be prepared for the unexpected. 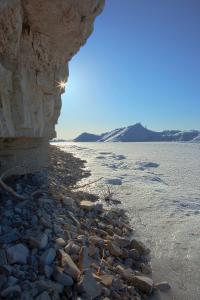 Sometimes HDR is the only option. HDR is a tool I only use if all else is not an option because doing it right is a real PITA in the computer. In this case the correct time of the day to photograph it would have been much later with the the sun close to or just below the horizon. That would have made the exposure levels close enough that a split neutral density filter, or software to that effect, could have been made to work. However this spot is a 45 minute hike over very slippery terrain with no cell service at all. So if you fall and break something you are up that old creek. By combining 8 images and processing as HDR I was able to make it work. Tempting to do it again though later and risk the walk back in the dark. Stay tuned. Another full moon next week. 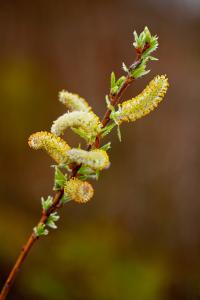 When I first started photographing nature a friend of mine, also a photographer, said that while technically superb my work was, at times, to complex. A good image, he said, should tell a story. If you can tell that story simply, he went on to say, your image will go from good to powerful. He explained it like this, think of it as powerful writing, use as few words as possible. With that in mind this image says, to me, spring ready to burst forth. It is also is taken at one of my favorite places on this planet, Jackson Harbor AKA tadpole bay. Have a great holiday weekend. Stay safe, warm and dry. 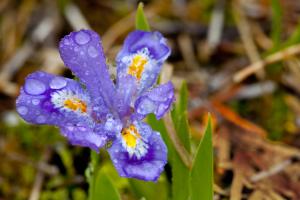 For me, spring time means, among other things, macro photography of wild flowers. Rain makes this even better, although the rain on the day this image was taken was almost to much. After a couple of hours all the flowers were drooping from the weight of the rain and I along with my gear were beyond wet. One of the challenges for me in macro is the inability to rely on auto focus. Manual focus with depth of field preview is the order of the day. That is a chore for my old eyes as the reduced depth of field as you get closer and closer to your subject means very small apertures and very dark view finders. While editing the images down to the few I wished to keep I was very glad I was not back in the days of film when every press of the shutter was $1.50 spent.